Genealogy in 2016: Accentuate the Positive

With the 'Accentuate the Positive' geneameme, Jill Ball encourages us to focus on our recent genealogical achievements, not the things that are still on our 'to do' list at the end of 2016.

Briefly...  Kitty ASHTON was born in Yorkshire, England, probably in 1777 or 1778. She married Peter MATTHEW in 1803, and died in 1862. Associated surnames include HUDSON, LEAPER and GELDER, and perhaps MOUNTAIN. If you think we are related, please contact me as explained below.

On 6 Feb 1803, at Kirby Misperton, North Yorkshire, England, Kitty ASHTON of the parish of Kirby Misperton was married (by banns) to Peter MATTHEW of the parish of Crambe. Both signed. Witnesses were Mary MATTHEW, John HARWOOD and Isabella BOWER. (Names of the last two witnesses are rather difficult to read, but they both appear as witnesses to other marriages in this register.)


The Bishop's Transcript of the burial register for Crambe, Yorkshire (North Riding) says 'Peter MATTHEW, abode Barton, buried 3rd April 1832 aged 74' (Borthwick Institute for Archives ref.PR-CRAM 8 page 22). If this is Kitty's husband, he was a lot older than her. I have not yet found a will or other document to prove or disprove my theory.

In the 1841 census, Kitty was not with Jane and William LEAPER or Christiana and William HUDSON, who were then at Barton-le-Willows. I eventually found her, but not easily, because her given name is not shown in census indexes. Aged 63, she was at Pontefract with her son-in-law William GELDER and his young children. His wife, Kitty's daughter Elizabeth, died in 1840.

When I saw the handwriting in the General Register Office index, I could understand that mistake.


Sources used in this research include

If you think we are related, please contact me by email at genieblogs@gmail.com or by post as explained here. I also welcome comments (including suggestions for research strategies or sources).

A friend challenged me to name ten books that have had an impact on my life. I didn't want to 'over-think' this, so here are some that quickly sprang to mind. (Yes, I know I have cheated by listing a trilogy as one item!)

Although I try to support local bookshops, sometimes it is both cheaper and more convenient to order a particular title via The Book Depository, whose excellent service includes free shipping worldwide. For out-of-print books, I search at Abe Books. Number 10 is certainly not 'light reading', but it needs to be on this list because it changed the course of my life. If family history is your hobby, have a look at 'Suggested Reading (Genealogy and History)'.

Eighteen weeks without any water... then just two days after rain, these beautiful lilies (Zephyranthes) burst into bloom! They are very low maintenance, and the bulbs multiply rapidly.

The Australian Meal Panel (by DBY Research) has some interesting new questions this month. I have been taking part in this paid online survey for several years, and if you live in Australia, you can too. The money I earn is either donated to charity or used to buy certificates or wills for family history research.

About once a month you will receive an email inviting you to do a short survey about food, for which you will be paid. You can also earn extra money by sending in one week's supermarket receipts after each survey.

DBY Research is a consumer research group specialising in food and food retailing. They need people of all ages across Australia to tell them what foods they buy and what they eat. The information sought is not sensitive or private, and it is strictly confidential. By completing the survey, you help to establish important facts and trends about the eating habits of Australians.

In a comment on Our Family Christmas - Then and Now, Donna asked, "What is White Christmas?" and I explained that it is a type of confectionery. This is the recipe I use, but there are many variations.

Melt the shortening. Add vanilla. Place all dry ingredients into a bowl and mix thoroughly. Add melted shortening (not too hot) and mix till well combined. Press into a shallow tin and allow to set in refrigerator. Cut into squares.
~~~
© Copyright, Judy Webster - 8:20 PM 0 comments

Our Family Christmas - Then and Now


In 'Family History Across the Seas', Pauleen invited us to take part in the 2012 Christmas GeneaMeme by describing how we celebrate Christmas in our part of the world. I will answer these questions from both a historical and a modern Australian perspective.


When I see my sisters I will ask whether they want to add a comment with their own special memories. I enjoying reading about other people's Christmas traditions (especially those in other parts of the world), so I hope you will write your own story and put a link to it here and on Family History Across the Seas.

Early Spring is a beautiful time of year at 'Taminga' (our late father's home on 32 acres an hour's drive west of Brisbane). We are having glorious sunny days with temperatures in the mid-20s (Celsius) and nights that are 5-10 degrees C. (cool enough to enjoy snuggling under a doona). On a more worrying note, we have not had a drop of rain here for two months and a bushfire came a bit close for comfort recently.

I enjoy taking photographs that capture the beauty of Nature, and I will share some of them with you. Today's photo shows an orchid (attached to a tree) that was almost invisible until it burst into bloom yesterday. 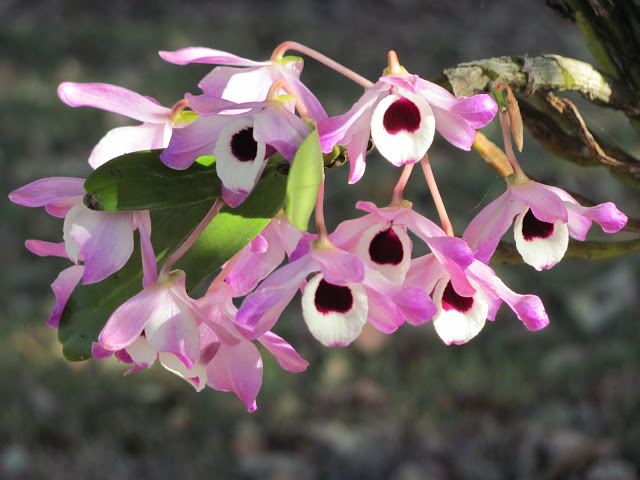 James Webster's freedom certificate (left side) One of my family treasures is the original Certificate of Freedom issued to my grea...

This work is licensed under a Creative Commons Attribution-NonCommercial-NoDerivs 3.0 Australia License.